This open-faced tuna melt is crunchy, cheesy, comforting, and comes together in just a few minutes with ingredients you probably already have in your kitchen.

Tuna is also a great lean protein source. It’s is rich in protein and contains B-Complex vitamins, Vitamins A and D as well as iron, phosphorus, and healthy omega 3 essential fatty acids.

Tuna cakes? Yup. Tuna casserole? I’ll take seconds, please. But nothing is easier to make and more comforting than a tuna melt sandwich.

With just a few humble ingredients that you probably already have in your kitchen- bread, cheese, tuna, mayo, and a couple veggies- you’re well on your way to a filling and satisfying meal.

What is a tuna melt

A tuna melt is a kind of hot sandwich containing cheese and a tuna salad mixture, then heated up to melt the cheese. It can be served closed or open-faced.

Other common fillings include pickles, tomato, lettuce, and mustard.

To understand how the tuna melt was born, we first need to know how tuna salad came into existence.

The post-Industrial Revolution brought us the mass production of the three ingredients key to making this sandwich the embodiment of the American working class spirit- canned tuna, pre-sliced bread, and mayonnaise.

In the 1800s, Americans didn’t think albacore tuna was worth eating and instead used it for bait in fishing or fed it to animals. Canned sardines, however, were very popular and what canned tuna did exist in America at the time was imported and consumed by Italian immigrants.

Overfishing and bad ocean conditions made for a terrible sardine season in the early 1900s, so sardine company executives looked for another local protein located off the California coast at the time- tuna.

In the 19th century scraps leftover from dinner- pieces of chicken, fish, carrots and celery- were mixed with mayonnaise and relish and served on lettuce for lunch. Women started spending more time in public life- at first department stores and then the workforce- and once canned tuna became big, the tuna fish sandwich was a quick on-the-go lunch.

Tuna quickly rebranded itself from an undesirable fish to the go-to lunch counter sandwich. Canneries exploded all over the West Coast, thanks to innovative fishing methods from Japanese immigrants based in LA and San Diego.

Fast forward a few decades to the tuna melt sandwich. Legend has it that it was accidentally invented at a lunch counter in Woolsworth department store in Charleston, SC in the 1960s. A busy cook was cranking out orders when a bloop of tuna fell on a grilled cheese sandwich. He tried it and discovered this delicious combination.

How to make a tuna melt

You can use pickles, various relishes like chow chow, and even pickle juice (like we do). Fresh veggies like onion, celery, and carrot are usually added as well as fresh herbs.

For our tuna salad, start by mixing together the following ingredients:

Now that you have your tuna salad mixed together, it’s time to get the sandwich together. Slice French bread at about an inch thick, and lightly toast the slices. Giving the bread a little stiffness helps them hold up the tuna salad.

Next, place the pieces of bread on a baking sheet and dollop with tuna salad. Next, sprinkle with extra sharp cheddar cheese, which we think is a must. 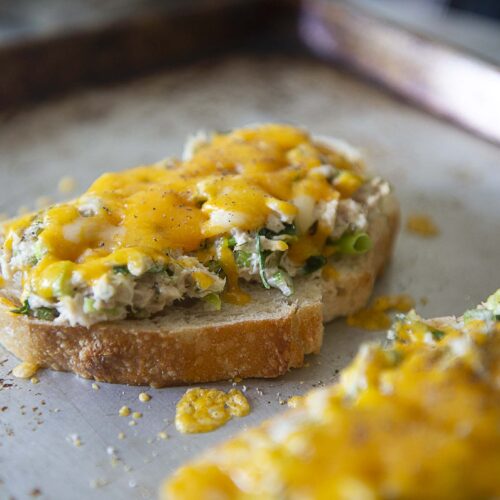